Writing from the deck of my house on one of the last perfect summer mornings of August, I am thinking back on all the events of the season and recalling one of the highlights, our annual trek to the yearly convention of the Pyrotechnics Guild International, held this year in Fargo, North Dakota. It was in this lovely city that I discovered Books at a Fifth, a small, but impressive, used bookstore. There it was, snuggled up next to a barbershop in a small strip mall less than two blocks from, of all things, a Barnes and Noble. Now I have nothing against Barnes and Noble. I am in fact a frequent B & N shopper possessing both a membership card and a Mastercard from said store. But outside of discovering whether or not there is a cafe or a music section, when you enter an unfamiliar Barnes and Noble, you know exactly what to expect. It will be very--well--familiar. That's one of the reasons why I find it such a treat to unearth an independent bookstore, rather like trailblazing a new route to a favorite place taking back roads instead of the highway. I was immediately intrigued by this small bookstore that had the chutzpah to be located in such close proximity to the giant of bookstores. 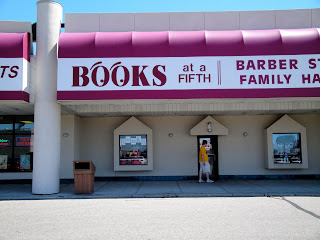 Gem of the North 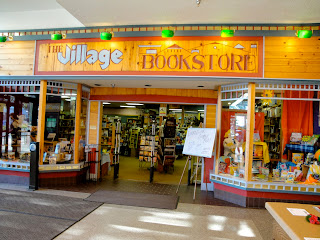 As we made our way across Michigan's Upper Peninsula (the UP to native Michiganders), my senses were inundated by the breathtaking beauty of the region. More than the quiet splendor of the rolling evergreen forests, more than the wilderness unencumbered by the trappings of urban life, more even than the gloriously rugged vistas along Lake Superior, it was the smell that I most appreciated--the spectacular, fresh piney aroma that permeated my nostrils. Across the UP and northern Wisconsin and into northern Minnesota, the beauty would continue. We were on our way to Turtle Lake, about 40 minutes north of Grand Rapids. (Michigan friends, take note: that's Grand Rapid, MN.) As luck would have it, the area is home to a small mall featuring The Village Bookstore, a shop completely fitting to the region in which it resides. 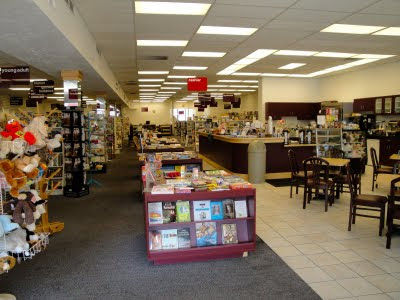 The wailing call of a loon on a still summer evening, a baby laughing, the subtle flutter of book pages being turned--all ear candy to me. The latter treat I enjoyed as I entered Horizon Books in Cadillac, Michigan. One patron, sitting in the comfortable cafe area next to the fireplace, was engrossed in a book while others with laptops were taking advantage of the free WiFi.

Where the Crawdads Sing
by Delia Owens
Lost Roses by Martha Hall Kelly
(See Book Reviews)
Dare Accepted by D. A. Reed
The Great Alone by Kristin Hannah
The Woman in the Window
by A. J. Finn
Midnight in the Garden
of Good and Evil
by John Berendt
Midnight at the
Bright Ideas Bookstore

by Matthew Sullivan
A Gentleman in Moscow
by Amor Towles
Lilac Girls, A Novel
by Martha Hall Kelly
(see Book Reviews)
The Immortalists
by Chloe Benjamin
The Trick
by Emanuel Bergmann
The Readers of Broken
Wheel Recommend

by Katarina Bivald
Turtles All The Way Down
by John Green
The Alice Network
by Kate Quinn
We Band of Angels
by Elizabeth Norman
Night by Elie Wiesel
Stowaway by Karen Hesse
The Sisters Brothers
by Patrick deWitt
Devil In The White City
by Erik Larson
Irena's Children
by Tilar J. Masseo
Still Alice by Lisa Genova
The Edge of Lost
by Kristina McMorris
Haymaker
by Adam Schuitema
Love & Vodka by R. J. Fox
A Secret Gift by Ted Gup
A Man Called Ove
by Fredrik Backman
(See Not a Book Review)
The Boys in the Boat
by Daniel James Brown
Kitchens of the Great Midwest
by Ryan J. Stradal
The Worst Hard Time
by Timothy Egan
The Nightingale
by Kristin Hannah
(See Book Reviews)
Go Set a Watchman
by Harper Lee
The Rosie Project
by Graeme C. Simsion
The Invention of Wings
by Sue Monk Kidd
Orphan Train
by Christina Baker Kline
Ghost Soldiers
by Hampton Sides
All the Light We Cannot See
by Anthony Doerr
The Storied Life of AJ Fikry
by Gabrielle Zevin
The 100-year-Old Man Who Climbed Out the Window and Disappeared
by Jonas Jonasson
An American Summer
by Frank Deford
Unbroken
by Laura Hillenbrand
Beautiful Ruins by Jess Walter
Mr. Penumbra's 24-Hour Bookstore by Robin Sloan
Mary Coin by Marisa Silver
Me Before You by Jojo Moyes
The Dog Stars by Peter Heller
Code Name Verity
by Elizabeth Wein
Villa Triste by Lucretia Grindle
The Unlikely Pilgrimage of Harold Fry
by Rachel Joyce
City of Thieves by David Benioff
Life of Pi by Yann Martel
Cloud Atlas (See Review)
by David Mitchell
Poisonwood Bible
by Barbara Kingsolver
The Paris Wife by Paula McLain
Bel Canto by Ann Patchett
Trapeze by Simon Mawer
Stormy Weather by Carl Hiaasen
(See Brief Review)
Tai-Pan by James Clavell
Q. A Novel by Evan Mandery
Spirits & Wine by Susan Newhof
The Fault In Our Stars
by John Green
Beloved by Toni Morrison
The Yellow-Lighted Bookshop
by Lewis Buzbee
The Stupidest Angel
(See Book Reviews)
by Christopher Moore
State of Wonder
by Ann Patchett
Moloka'i (See Book Reviews)
by Alan Brennert
Bliss, Remembered
(See Book Reviews)
by Frank Deford
The Help
by Kathryn Stockett
Once Upon a River
by Bonnie Jo Campbell
One Day
by David Nicholls
Sarah's Key (See Book Reviews)
by Tatiana de Rosnay
Okay For Now (See Book Reviews)
by Gary D. Schmidt