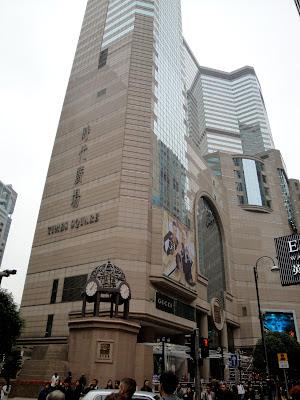 After two disappointing attempts at visits to Hong Kong bookstores, (See Hong Kong, Part I) my husband and I were making our way on foot back to our hotel when we came upon Hong Kong's Time Square. That's right. Hong Kong has one too, not a square so much as it is a building and a grand one at that. Tall and contemporary with broad steps leading to an entry plaza, it comes complete with a jumbotron showing video announcements and advertisements. It certainly looked interesting enough to warrant our going inside to have a look. 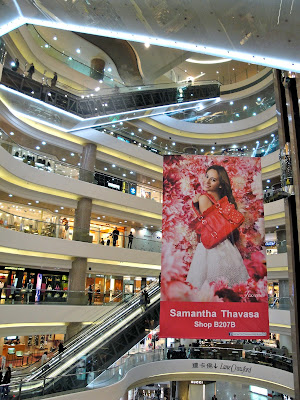 Inside, this building provided a stunning example of the beautiful, sleek and shiny, contemporary side of Hong Kong. Glass elevators and open escalators flank a 10-story atrium while curved balcony walkways provide access to a myriad of shops and restaurants. Hong Kong's Time Square is essentially a vertical shopping mall, one of many actually. Hong Kong is a shopper's paradise.

Imagine my excitement when, upon checking the building index, we discovered that in addition to the fashionable clothing shops, jewelers, and department stores there was a bookstore, Page One, which surprisingly was next on my list for an attempted visit. Well, sort of. I had actually intended to visit a Page One shop in a different part of the city, but I was happy to forgo that plan in favor of the Times Square Page One. So we boarded the glass elevator and headed up to take a look.

The bookstore is every bit as sleek and contemporary as the building in which it resides. Patterned wood floors and clean, simple bookshelves and counters are brightly lit by chrome track lights on multilevel suspended ceiling panels. The high-tech look and feel of the shop is not surprising since Page One is known as an architecture and design resource. It's stock in this area is large and impressive. 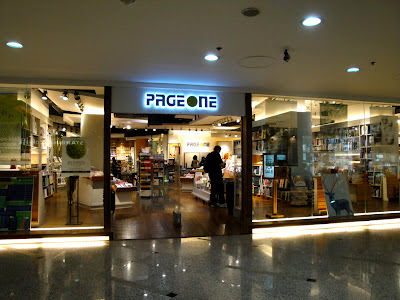 Also impressive are the children's and young adult sections displaying many of the same top sellers one might find in an American bookstore, the latest Rick Riordan sequel, for example. Unique toys and gifts also abound.

For the most part Page One is very much like a bookstore you might find in the states, but it does have its unique elements. My husband was particularly intrigued by a large display of retro cameras, many of which had brightly colored cases rather than the usual black. And yes, they were old-style film cameras. 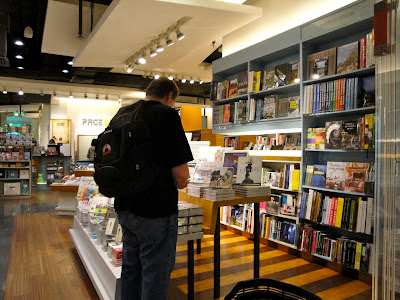 We got a chuckle out of a unique twist on the now-famous yellow and black "For Dummies" series, this one titled Feng Shui for Dummies. Pretty appropriate for a Hong Kong bookstore, don't you think? 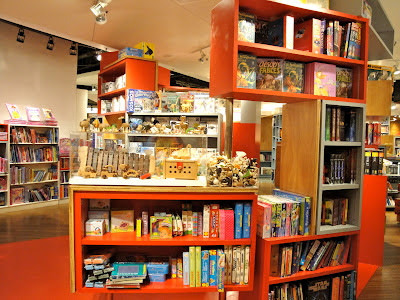 Page One sells a variety of books in both English and Chinese. We were surprised to see that most of the books were shrink wrapped, which prevented thumbing through them, but did keep them all in good condition.

I took special note of the "Best Sellers" display. Number One? The Steve Jobs bio. Also included were The Help and The Hunger Games in addition to several titles for younger readers like the latest Eragon sequel and Diary of a Wimpy Kid. It would seem that reading tastes are similar on opposite sides of the globe. 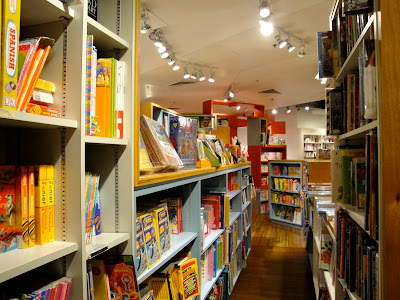 As part of my blogging project, I make it a point to purchase something from every bookstore I visit, and I saw no reason to change that procedure in Hong Kong. I spent several minutes browsing a large display of postcards finally settling on a few featuring the city skyline at night. I am particularly thankful for those pictures now given the fact that it was quite foggy during our entire stay in Hong Kong, so our photos do not have the clarity of those on the postcards. And with so many unique books to choose from, I had no difficulty finding a fun title. I settled on The Cartoon Guide To Calculus by Larry Gonick. It will be a gift for someone special who loves calculus (not).

Our visit to Page One in Times Square was unexpected and memorable. I will, in fact, think of this special store every time I start reading a new book because as the store motto says, "Every book begins with Page One."

I'm so jealous! From the pictures, HK Times Square looks like an amazing place to visit, as well as the bookstore within! And I'm sure that whoever receives your gift will greatly appreciate it :)

I applaud your efforts and love your candid storytelling on your adventures. I too, am envious of your quest but keep it up so others like me can travel vicariously through you.