The adventure continues . . .
From contemporary to traditional

After Hong Kong's Times Square and the unexpected pleasure of Page One books, we hoofed it back toward our hotel in the Causeway Bay area. Before going up to our room, however, we decided to take a side trip through Victoria Park, a lovely area that comprised the majority of the view from our room. I was savoring the opportunity to wear a t-shirt, cropped pants, and flip flops in the middle of February and wished to augment that joy with a close-up look at the park's palms, unfamiliar exotic trees, blooming azaleas, and various tropical flowers whose names I don't know. A tranquil respite from the fast-paced city, Victoria Park is paradoxically nestled in the midst of skyscrapers, highways, and the busy harbour. 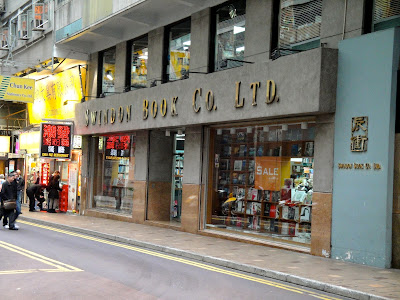 Nowhere is the famous east-meets-west aspect of Hong Kong more evident than in this lovely park. At first morning light, the large grassy area in the center is the scene of locals practicing T'ai chi while a likeness of the park's royal namesake, Queen Victoria, stands at the entrance. Nowadays, the sun does indeed set on British soil, yet a profound British influence is still apparent in Hong Kong, an influence also exemplified in the next bookstore on my list, Swindon. After a brief rest stop at our hotel, we set off again across Victoria Harbour to the Kowloon area in search of this old store. 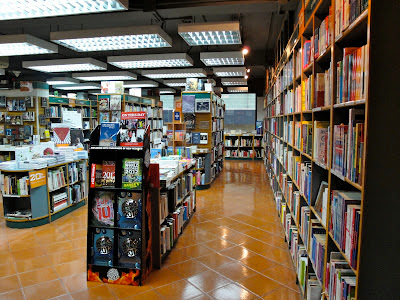 Swindon was not difficult to find given its sizable, two-story street front and the large English block letters stretching nearly the length of the building--Swindon Book Co. Ltd. No chrome, no neon, no escalators. In contrast to the sleek, contemporary Page One, Swindons imparts a distinctly traditional feel. Plain tiled floors, subdued colors, and walls lined with utilitarian wood and laminate bookshelves well lit by simple florescent light fixtures give the shop a comfortable, almost library-like feel. 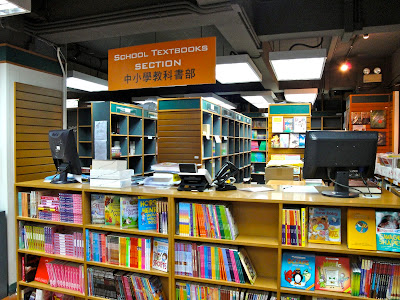 Polite and friendly store manager, Norman Fung, provided me with some background information about the shop. Founded way back in 1918, Swindon has a professional and educational focus which includes the provision of textbooks for schools from primary to college level. American students may find it hard to imagine going to a bookstore to purchase their school textbooks, but in this particular store, there is a section set aside for just that. Of course, other non-fiction titles as well as fiction and periodicals are also available. Most books are in English, but some titles are available in Chinese as well. 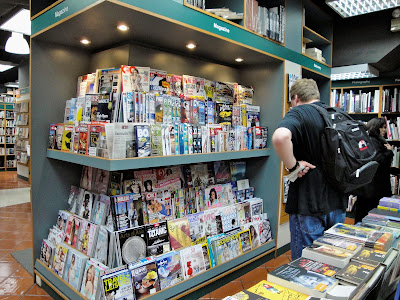 Swindon employees were exceedingly helpful and eager to be of assistance. I mentioned that I was interested in a particular author, James Clavell, and two staff members immediately sprang into action. One looked up the author on the computer, and in mere moments the other located Clavell's Noble House and brought it to the front desk for me. Those familiar with it will immediately understand my interest in this particular book. It is a historical fiction work set in Hong Kong. What more appropriate purchase could I make from this establishment. I left the book in good hands at the counter while I went to investigate Swindon's second floor. 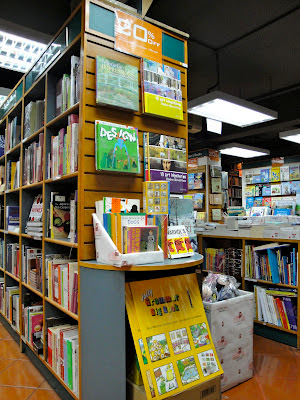 A wide, well-worn wood staircase leads to the upstairs portion of the store which houses the textbooks department as well as a large selection for young adults and children. Swindon may be traditional and educationally focussed, but it is far from stuffy. Of note in the YA area was Georgia Nicholson's Fab Final Confessions, significant in its delightfully unstuffy Britishness. And in the children's area, I was drawn to an art series by Angela Wenzel, previously unknown to me, each title featuring 13 of something: 13 Art Mysteries Children Should Know, 13 Artists Children Should Know, 13 Sculptures Children Should Know--well, you get the idea. Of special interest to me was another unique art book for children titled Monet's Impressions, a picture book featuring paintings of Monet paired with his own words taken from personal letters. There was a similar book called Vincent's Colors featuring the work of Vincent van Gogh, but I, being a Monet fan, selected the Impressions book and headed back downstairs.

As I stood at the main desk making my final purchases, Norman appeared again providing me the opportunity to thank him for his help and tell him how much I had enjoyed my visit to Swindon Book Co. I told him that to me his bookstore felt very scholarly and British, to which he smiled broadly and replied,
"Exactly."

I am essentially satisfied together with your great work.You put truly extremely supportive data. Keep it up. Continue blogging. Hoping to perusing your following postkids clothes online australia