I'm going to stray from my customary bookstore blog format for just a bit here. Please bear with me. I don't fancy myself much of a book reviewer, but I will give it my best shot since in this case, I think it is well worth the effort.

Obviously I do my fair share of reading. I have posted on this blog a list of some of my favorite books. But rarely does a book come along that moves me to such a degree that I feel immediately compelled to read it again. Such a book is Cloud Atlas by David Mitchell. So impressed with it was I, that it currently competes for my top honors with The Book Thief by Markus Zusak, my heretofore favorite book of all time. No small feat that.

I must, however, begin by noting that I came close to putting the book down and giving up on it during the first 50 pages. This is not to be read by the literary faint of heart. It is challenging, confusing, and mind-numbing. But it is also creative, meaningful, and absolutely brilliant. Not so difficult to read as Joyce's Ulysses, neither is it an easy Hunger Games kind of read.

The book begins in the 1800's with a tale told via the journal entries of a young California lawyer on a voyage in the South Pacific. It stops, maddeningly, in mid-sentence. It is not, however, an error in printing. The story I soon realized would be completed later. Actually, in each of the first five stories, Mitchell interrupts the action to begin the next tale. The second is a story of a disinherited young composer set in the 1930's and related via letters to his lover. That is followed by a mystery involving an investigative journalist in the 1970's. From there the book moves to modern-day England with the hilarious misadventures of a book publisher. Then it's on to a science fiction story set in a corpocratic future where clones exist as virtual slaves. The sixth and final story, which takes place in a post-apocalyptic Hawaii, is told in full and makes up the middle of the book, the backbone if you will. Then in reverse order, each of the first five stories is fully completed with the book coming to its conclusion back in the 1800's when the journal picks up in mid sentence right where it left off a few hundred pages earlier. Does your brain hurt yet?

I found Cloud Atlas to be breathtakingly brilliant, and am currently re-reading it to pick up on more of the subtle connections that I no doubt missed on my first reading. What's more, I am toying with the idea of a third reading in which I adjust Mitchell's chronology to read each of the six stories singularly.

Like I said, this book is not for everyone. But if you are one who appreciates exceptional writing, imaginative plot lines, and literary genius, give it a try. Perhaps you will be hooked as I was. Author Dave Eggers hit the nail on the head when he described it as “one of those how-the-holy-hell-did-he-do-it? modern classics that no doubt is—and should be—read by any student of contemporary literature.”

By now you have no doubt heard about the movie adaptation of Cloud Atlas. Of course I saw the movie the day it came out. Although the chronology is completely different (the stories are told in short bursts and move almost simultaneously toward their conclusions), I found it to be a relatively faithful adaptation and appreciated the filmmakers' changes. I do believe that the film could be confusing without some prior knowledge of the format of the novel, so I suggest reading the book before seeing the movie. They complement one another well. Regardless, the movie is well worth seeing. I mean, come on, it has Tom Hanks. In multiple roles no less.

Intrigued? Take a look at the trailer.


Read the book, see the movie, and then go out and be kind. You'll know what I mean. 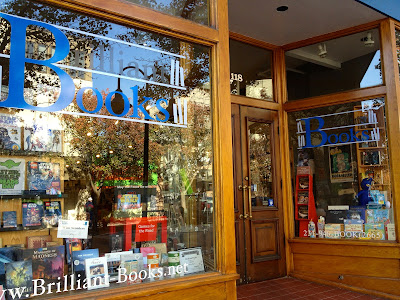 Retirement affords me many luxuries. I can go for a walk in the middle of the day on a Monday or decide to completely chuck my original plans for the day because I suddenly found myself caught up in an engaging movie on AMC. I can grocery shop at 10 a.m. on a weekday without the companionship of crowds. Afterwards I can cook. Real meals. From scratch. With fresh ingredients. I can go to the mall around the holidays at convenient times when the parking lots aren't full. At the risk of being perceived as rubbing salt in the wounds of those of you still laboring at gainful employment, I have to say that one of the greatest luxuries of all is the freedom to hit the road on a beautiful fall day during the week when normal people are working. Whether planned or as the mood strikes, such road trips are always something to be savored. This past October the opportunity for one such road trip presented itself. I took a drive to Traverse City, Michigan, to visit with my old high school friend Tim, who had accompanied me on my trip to Reading Books, the store in an old train car. It goes without saying that there would likely also be a bookstore involved in this trip. 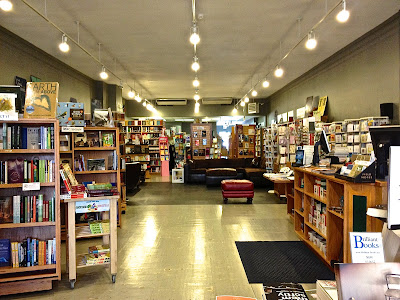 On my trip to "The Most Beautiful Place In America" a little over a year ago when I had barely begun my blogging adventure, I had occasion to visit Brilliant Books, a wonderful little bookstore in nearby Suttons Bay. Since that time, Brilliant Books has opened a new store in downtown Traverse City. An old friend, a new bookstore . . . what more could a retired librarian ask for except maybe perfect weather. It's not often that mid October in northern Michigan supplies sunny, 70-degree weather, but this was one such day. Having made arrangements with Tim to meet at Brilliant Books, I happily hit the road. Oh, and did I mention that it was a Wednesday?
Read more »
Posted by M Redd at 10:11 PM No comments:

Now this is some library:

Amazing architectural design at the
National Library of Belarus in Minsk.