The 2014 book list is out. You may remember that I participated in World Book Night last year. (See WBN) I enjoyed it so much that I intend to apply to be a book giver again in 2014. Interested? You can find out all about it and apply to be a giver at http://www.us.worldbooknight.org.
Posted by M Redd at 8:39 PM 2 comments: 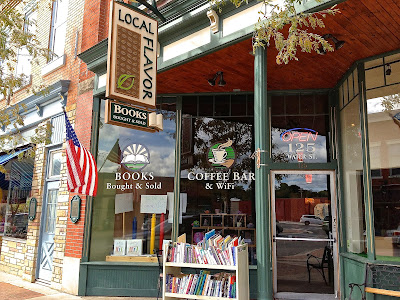 It's been a little over two years since I retired and started this blog. What a fun and wonderful two years it has been. One of the things I most appreciate is how supportive my friends and family have been. Serving oftentimes as roving lookouts, they let me know when they have spotted a bookstore I might be interested in. So one sunny Saturday in September I was not surprised when I got a phone call from one of my favorite scouts. My sister Sue and her husband Ralph were taking advantage of the glorious September weather we had this year by spending the weekend in the northern Michigan town of Boyne City where they happened to notice, as I'm sure you guessed, a promising bookstore. As luck would have it, I was at the family cottage only a couple of hours away. It was a lovely day, and I had an open agenda, so within the hour I was on my way to Boyne City.

Never before had I the pleasure of visiting this small town situated on the shores of beautiful Lake Charlevoix, but by the end of the day, I was in love with the place. An all-season tourist town, Boyne City offers sandy beaches, boating, and plenty of area golf courses during the summer as well as ski resorts for the winter sports enthusiasts. Now I don't have a boat, I can't claim to be much of a golfer, and I am definitely not a winter sports enthusiast, but as you well know by now, I am a lover of bookstores, and Boyne City is home to a charming one called Local Flavor.
Read more »
Posted by M Redd at 3:09 PM No comments:

Okay, so it was more like two weeks than two years since my last visit to the Cottage Book Shop. But I wanted to actually meet the owner, I wanted to find out more about how the historic cabin was moved from its original location, and I really wanted one of those bright yellow shirts that boldly asks, "Got Books?" So once again I made the two-hour drive from our cottage to Glen Arbor. Just so you know, it's a beautiful drive, so other than the cost of gas, this was no sacrifice on my part.

I was in luck. On this visit Barbara Siepker, the owner, was in and was happy to share a few moments of her busy life giving me more information about the shop, in particular the details of how the cabin was moved. I learned that the structure was originally built on the shores of Glen Lake in the 1920's. Although the move to Lake Street in Glen Arbor was only about a mile, it was nevertheless quite a production. Steel beams were placed under the cabin and the entire structure was lifted allowing wheels to be rolled underneath. The whole kit and kaboodle, including its flowering window boxes, was towed down the street with Barbara and many local residents walking alongside.

There was some speculation as to whether or not the whole thing might end up as one giant pile of Lincoln Logs. "We had to replace the bottom row of logs," Barbara told me, and that was the extent of the damage. Of course, the plumbing and electrical systems had to be updated and other mechanical and heating issues addressed. Beyond these and other minor updates, the cabin remains as it originally was. What once was a bedroom is now the children's room. The main area of the shop inhabits what once was the living area. And cookbooks line the wall just outside the original kitchen. Kudos to Barbara for preserving this rustic piece of Americana and turning it into a great little bookstore. I can't think of a better use for this charming cabin.
Posted by M Redd at 12:06 PM No comments: