In A Country Shire Once again I find myself in the annual interim between Christmas and New Year's, the perfect time for introspection and review of the year about to end. In 2016, I reached a milestone—my fifth year of retirement from my job as a high school librarian. I am only now just beginning to actually think of January, rather than September, as the start of a new year. It's hard to believe I have been doing this blog for five years. When I began, I really had no idea that I would still be finding new bookstores to write about. Part of me expected to find that brick-and-mortar bookstores would be scarce by now. Happily, quite the opposite is true.

Quite by accident I happened upon the last bookstores I visited in 2016. On a drive through rural central Michigan, my route took me through the small town of Evart. Now, I have made it my habit when passing through any unfamiliar town to drive slowly along the main street just in case the community might be home to a bookstore. You never know. In the case of Evart, the main downtown street runs perpendicular to the two-lane highway on which I was traveling, a fact which I noted only after I had already passed through the intersection. As the afternoon was waning, I debated for about a quarter mile as to whether or not to take the time to turn around. Evart is but a small country town after all. Of course my bookstore curiosity got the better of me, and I did indeed turn around. Thankfully. For low and behold, I did indeed find a bookstore in this country hamlet, Northon's Shire Bookshop, and there was still about half an hour before closing time.
Read more »
Posted by M Redd at 6:36 PM No comments: 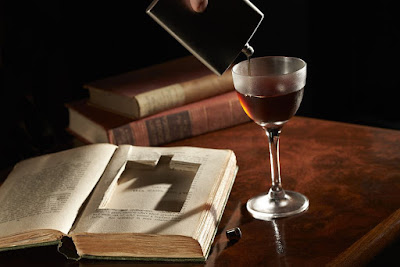 I know plenty of bibliomaniacs who devour books, figuratively that is. Now thanks to The Book Nook and Shelf Awareness, I have learned that it is possible to literally imbibe books. The Columbia Room, a cocktail bar in Washington D. C., has created a drink that literally uses pages from old books as an ingredient. This creation, served in a flask inside of a book, is called "In Search of Time Past" and is part of a three- or five- cocktail tasting flight. Don't expect happy hour prices for this concoction. The three-course option is $79. I guess that's to be expected when pages from a 100-year-old book constitute a key ingredient. For more on this literary cocktail, see this article from Washingtonian.
Posted by M Redd at 12:03 PM No comments: