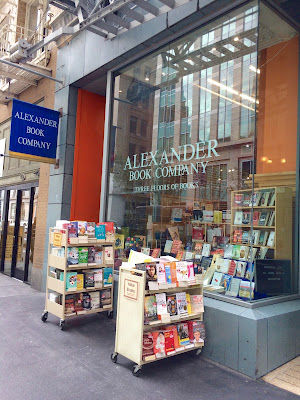 One more day. According to the local forecast in San Francisco, I had only one more day of agreeable weather before mother nature would swap cool rain for the sunny skies and pleasant temperatures I had enjoyed so far. One more day—one more bookstore. This time, however, I was determined not to encounter any more severe hill climbs (see previous post), opting instead to exercise my newly acquired Uber skills. So I fired up my app, and a few short minutes later (Uber drivers are plentiful in San Francisco.) I was on my way downtown to Alexander Book Company.

Upon entering the multilevel establishment, I was promptly greeted by two amiable booksellers, Allen Yee and Bernard Henderson. They explained that if I really wanted to learn about Alexander Book Co., I should talk to Bonnie Stuppin, who owns the store with her brother Michael. This intrigued me, especially considering my relationship with my own two brothers. I love them dearly, but there is no way that I would ever want to run a business with either of them. So at the direction of Allen and Bernard, I headed upstairs. 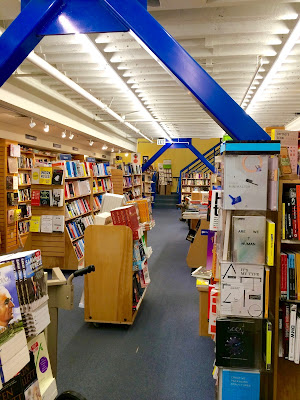 I was immediately attracted to the bright blue metal stair railing and support beams standing in stark contrast to the exposed brick walls and giving the three-story establishment an appropriate downtown loft feel. Upstairs I found Bonnie hard at work at a desk in a bright, charming children's area, and she was happy to provide some background.

Originally her brother's idea, the store had a shaky beginning. Literally. The building was purchased in 1989, and just one week after the title was obtained, the area was hit by an earthquake. Yes, that one. The one that interrupted the World Series between the Oakland A's and the SF Giants. Fortunately, there was minimal damage to the building, but adding additional support to the old structure was necessary. So that explains the bright blue beams. 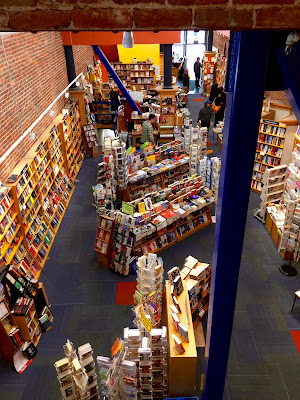 According to Bonnie, they spent months under construction, finally hiring staff in August of 1990, and opening for business on November 15.

While Michael's work keeps him mainly in the basement level of the store, Bonnie handles the kids and cooking sections upstairs. Being separated by one whole floor, she says, helps them to maintain an amicable sibling relationship. More power to them. I'm not sure that even three floors could persuade me to attempt a business relationship with my brothers. 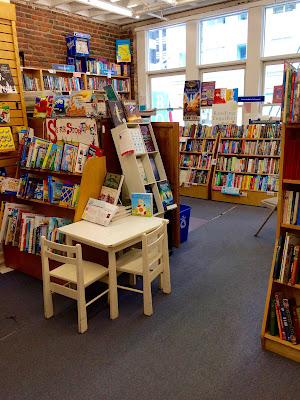 I talked at length with Bonnie about bookstores and books before finally heading downstairs to browse. In addition to a great selection of new titles, the store also buys and sells textbooks for Academy of Art University. And I found a fabulous selection of book bags. For a cat-loving friend, I just had to purchase one featuring a cat and a book, Of Mice and Men. What's not to love?

I'm so happy that Alexander Book Company survived the big quake. It was a delight visiting the store and meeting Allen, Bernard, and Bonnie.