A Big Apple in San Francisco 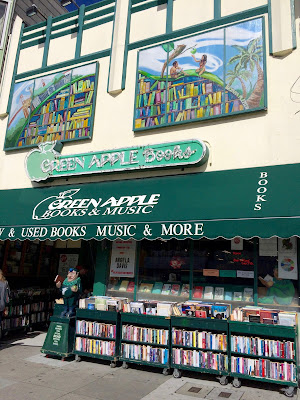 “Content: pleased and satisfied, not needing more.” Webster's definition aptly describes my state of mind after two and a half lovely days and three great bookstores in the remarkable city of San Francisco. (See City Lights, Russian Hill, and Alexander.) I had taken full advantage of some delightful weather to venture forth within a reasonable radius of our hotel. With decidedly gloomier conditions forecast for the remainder of our time in the City, I was indeed content with the bookstore experiences I had enjoyed. But in the back of my mind was a recommendation I had received from Bonnie Stuppin during my visit to Alexander Book Company. “You must go to Green Apple,” she said. Perhaps on my next trip to San Francisco, I thought. But as luck would have it, I awoke the next morning to a sky with just enough blue to give me hope that I might be able to sneak in one more bookstore, and off I went. After all, when a bookstore owner recommends another store, I take that very seriously.

A longtime fixture in the Bay Area, Green Apple sells both new and used books. As a matter of fact, the used book buyer, E. H. Mann, was the first staff person I spoke with. He suggested that I talk to one of the owners who was currently in the shop. I found Pete Mulvihill among the shelves, and he graciously provided some history. Green Apple turns 50 this year, and although the store currently boasts a generous 8,000 square feet of books and merchandise, its beginnings were decidedly more modest. Originally only 750 square feet, the shop has expanded multiple times first adding more width, then a mezzanine level, and ultimately another building, a neighboring record store, thereby adding new and used music to the offerings. 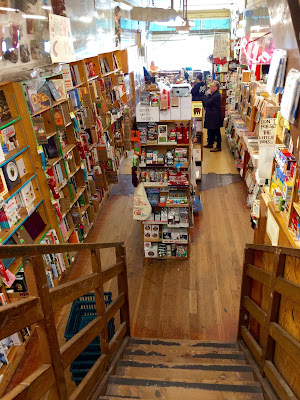 Pete was originally part of the staff at Green Apple, as were the other co-owners, Kevin Hunsanger and Kevin Ryan. In the 90's, Pete and the Kevins embarked on a 10-year buyout plan that would allow them to spread the cost out while at the same time enabling the retiring original owner, Richard Savoy, to serve as a mentor while gradually relinquishing total control of the business. The plan seems to have been a good one as the store is thriving.

Pete grew up a “library kid” as he describes it, and it was fun talking books with him. When I mentioned how my to-read pile just keeps growing taller, he taught me a new book-related term that any true bibliomaniac can relate to, tsundoku, a Japanese word for buying books and letting them pile up unread. Here's an interesting article about tsundoku. 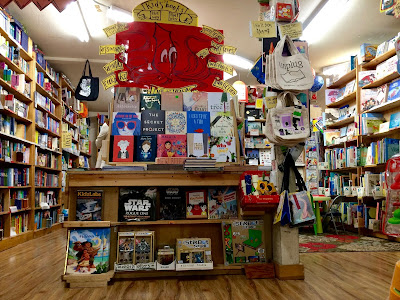 Green Apple is large, but not the kind of warehouse large that its square footage suggests. It is, rather, a maze of smaller spaces each filled in every nook and cranny. The old building looks rough, but well used and well loved. Creaky wooden floors and stairs lead from one intriguing room to the next, with an occasional desk or chair nestled amongst the new books, used books, book bags, cards, calendars, etc.

The only downside to this labyrinthian store layout is the difficulty it presents for holding author visits and special events. This problem was solved when Pete opened a second location, Green Apple Books On the Park, but I will have to save that visit for my next San Francisco trip. 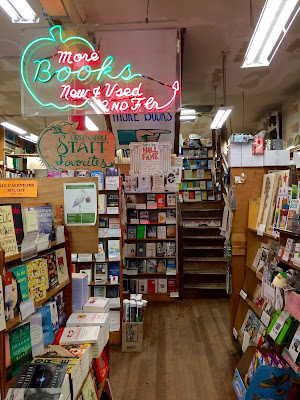 The store sells an array of fun t-shirts, many of which are designed by staff members. Of course, I had to have one of those as well as a book that caught my attention in an extensive “Staff Favorites” display. When I lamented the limitation of luggage space on my book buying ability, bookseller Max offered a solution. He informed me that they would be happy to ship books home for me for a very minimal charge. Say no more. I ended up purchasing three more titles, and I'm happy to report that they arrived at my home shortly after I returned from San Francisco. As of this writing, I have actually read one of them, so in my case, tsundoku doesn't always mean the pile is unread. Okay, three of them remain on the pile, but I'll claim progress wherever I can. 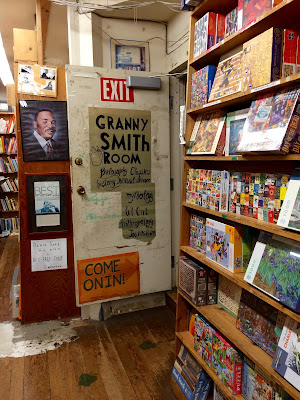 Later in the afternoon on the day of my visit to Green Apple Books, the San Francisco skies would indeed darken giving us scattered rain for the rest of our trip. One good thing about rainy weather, though, is that it provides a good excuse to stay in and read. Gotta get that pile down. How fitting it is that the t-shirt I chose sports the old saying, "So many books, so little time."

I'm so thankful that I had one more lovely morning to follow up on a great suggestion. If you are ever in San Francisco, Green Apple Books is definitely a must see.

The big bridge is lovely. The wharf is fun. But my favorite part of San Francisco on this trip was its wonderful bookstores!
Posted by M Redd at 8:00 PM