One of My Favorites 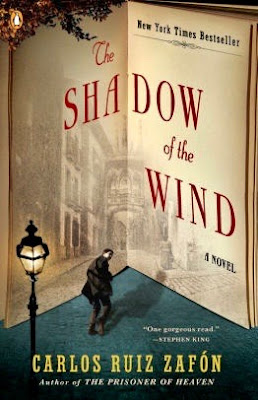 I don't do book reviews. Writing a good review is neither a skill I possess nor an activity I enjoy. Book recommendations? Now that's another story. Recommending books is second nature to a librarian. This week in particular I am compelled by an uncanny series of events to make a book recommendation, The Shadow of the Wind by Carlos Ruiz Zafon. I first read this stunning best seller several years ago before I retired from my position as a high school librarian. I was hooked on Zafon and not much later I read The Angel's Game, the second book in what would eventually become a four-book saga. It wasn't until after I retired that I discovered and purchased the third book, The Prisoner of Heaven. This third title sat in my to-read pile for three years. This frequently happens to me. I have a very large inventory of books that I can't wait to read, and with my frequent trips to bookstores, I am adding titles to that list regularly. At any rate, for reasons I can't really recall, I picked up Prisoner a couple months ago thinking that it was the last book in the series. About the time I finished it I was surprised to learn that there is actually a fourth book, The Labyrinth of the Spirits. Of course, I had to have that title too, only this one I didn't wait three years to read. The country was locked down. What better time to take on an 800-page epic. For some inexplicable reason, once I had completed the series, I immediately felt the urge to reread the first one. As I write this, I am about half way through its nearly 500 pages.

So why am I telling you all this? As the saying goes, timing is everything. This past week Carlos Ruis Zafon passed away at the relatively young age of 55. The world has indeed lost a brilliant writer. His books have been published and enjoyed in more than 40 languages.

So I am highly recommending The Shadow of the Wind, the first book in what is frequently referred to as the cycle of the Cemetery of Forgotten Books. Cycle is a more apt term than series since the books, by design, can actually be read in any order. They have characters and events in common, but each is a story unto itself. Set in Barcelona just after WWII, The Shadow of the Wind has been described as a modern gothic novel full of mystery, tragedy, romance, and memorable characters that will stick with you.

If you want to know more, NPR did a brief story on Zafon which you can read here: Bestselling Spanish Novelist Dies At 55. Thanks to my son Culver for passing the news on to me. That's all I'm going to say about it. Remember, I don't do book reviews. But I do recommend Carlos Ruis Zafon. We lost a great one this week.
Posted by M Redd at 5:10 PM No comments: 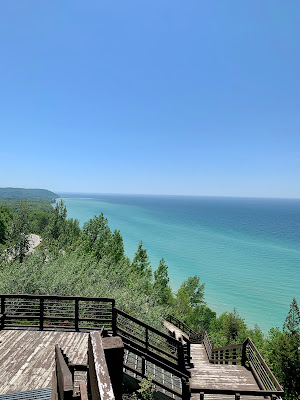 Summer at last. After pretty much missing spring this year, I am determined to enjoy my summer as much as possible. So last week on a perfect, beautiful day, I treated myself to a drive along my beloved M-22. For me summer is not complete without a climb up the steps at the Arcadia scenic overlook for a picture of Lake Michigan in all its glory. Farther up the road I stopped in the village of Empire for a quick look at the progress on the library expansion project.

A year ago I wrote about a visit to this charming town for the ground-breaking ceremony on this ambitious undertaking, and on this trip I was pleased to learn that the expanded library will be ready to open within a matter of a few months. A helpful construction worker, who was packing up for the day, filled me in. The inside is finished, he informed me, and staff will begin filling bookshelves in a week. All that's left to complete is the exterior. How exciting. Once it's all wrapped up and reopened, I'll have another excuse to take an M-22 drive to see the new Glen Lake Community Library. Can't wait. 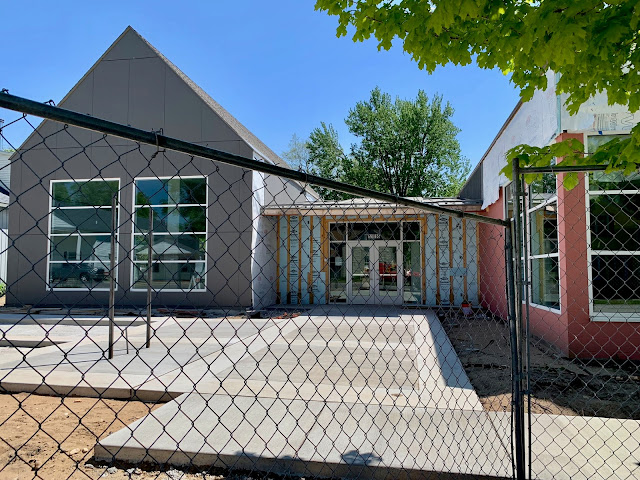